※Click here to see this article written in Japanese.

In addition to the nonsense of denying one's personality,

some are either mentally immature, uneducated, or both,

when they ask for advice or make suggestions, and

those whose thoughts are chaotic with negativity even if they don't say it out loud.

these people are unconscious, exclusive, and other-blaming, and

they are working hard to increase their intensity every day.

The act of denial is supposedly too embarrassing for most of the population size,

in terms of exposing their lack of tolerance, ignorance, and uneducated.

However, the reason why the current situation is infested with people

who deny is that they are not aware of it.

I would like you to think about the word "tolerance" that I mentioned above.

Why do people with a high level of tolerance become tolerant?

Stop for a moment and think about how you would answer that question.

This is an example of an image, so it shouldn't always be as follows

I'll try to explain what I imagine the majority of people would imagine.

Words have images and meanings attached to them,

such as properties and directions.

In the above, the question was "Why did you become tolerant?"

so many people would think about the cause.

Probably, when you hear the word "tolerance",

it means "something bad or unpleasant happened to me and I had to accept it, and

once I understood the experience as a sensory value,

I became immune to the same experience and became tolerant."

in line with this "flow".

In this case, the arrow of tolerance is the flow from "negative" to "good".

This unconscious flow from negative to positive influences governs the next word you choose.

As a result, the person who imagines this flow will say

When asked the question, "Why did I become tolerant?"

"Because I 'grew up' to be able to take the load and endure it until the next impact,"

in a positive direction, despite the difference in starting points.

But at the same time, the answer to this question includes

"The threshold has risen due to the load", which can be described as "slowing down"

(although it can be taken in different ways, of course) in a negative way,

but the conclusion of their argument, "becoming more tolerant

But they agree on the conclusion of their argument:" We have become more tolerant.

It just sounds more difficult to express in words, as the following image illustrates. 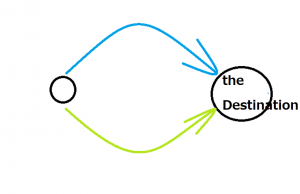 It's just that there is individuality in the direction of travel.

As you can see from this example,

as long as our thoughts and feelings are spun in words,

However, people who don't understand the characteristics of words

are uncomfortable with different ways of expression

because they are one-way.

I won't go into it in depth here, but if I were to interpret it more broadly,

I would say that the conflicts that occur between people are due to this kind of disagreement in direction.

People who learn other languages,

people who have a wide range of knowledge,

and people who think a lot about invisible things tend to be more tolerant.

The more you learn about a language, the more you notice the contradictions.

And when we are aware of such facts,

our answers to questions and inquiries often come to us instantaneously,

for the question to be answered, or even a combination of the two,

and we choose the best one.

This is how we act.

Since case separation happens all the time,

we subconsciously know that there are many candidates.

This reduces the probability of conflicting opinions, and

even if a conflicting idea is presented and causes discomfort,

takes precedence over the discomfort.

This is because words have many directions and interpretations, and

the person understands and humbly acknowledges that not all answers are the same.

If the person is acting in denial because of his or her morally correct beliefs,

that reflects the philosophy of his or her life.

And in many cases,

mentioned in the first part. And in many cases,

this method does not apply to people with the first unconscious trait,

because their self-evaluation will determine that

they have the right beliefs more often than not.

It is important to note that I am not suggesting that

people with this trait should be excluded from the world.

who support the current ethical way of thinking.

Every position, no matter how big or small, is righteous in the eyes of the individual.

If it must be black-and-white, then it is obvious that in a majority rule,

the weaker justice will be defeated.

But I don't believe that it is necessarily destined to be cut down.

that is currently considered to be unethical,

there can be "unethical justice that follows one's absolute ethics"

with the help of one's background. Likewise, I believe that there must be

and that this is possible even if there is the coexistence of the two conflicting sides.

other than the mother tongue,

in addition to the first brain dominated by the mother tongue,

a third brain arises to monitor them,

I am convinced that although the above two may be independent of each other,

a higher level of inclusion will arise when they meet.

I am reminded that it is very common for abstract concepts

to result in the form of the human being as it is.